La Milpa is the third largest ancient Maya site in Belize.  The ceremonial center is built on a high limestone ridge and, with more than 24 courtyards and over 85 structures, is in the topmost rank of Mayan sites.  The Great Plaza is one of the largest public spaces in the Maya world.  It is flanked by four temple-pyramids with the tallest standing 24 m above the plaza floor.  It contains two courts for the sacred Mayan ball-game, associated with ritual and sacrifice as well as recreation.  At the back, in the most defensible position, is the acropolis or palace.  There is also an administrative building with 13 gods of the heavens.  Under the plaza there are two storage pits (chultuns) and a row of stelae is lined up along the west side in front of the main pyramids.  Beyond the Great Plaza lie other plazas, pyramids and buildings, gradually merging into the surrounding jungle.  In all, the core area is reckoned to cover one square kilometer. 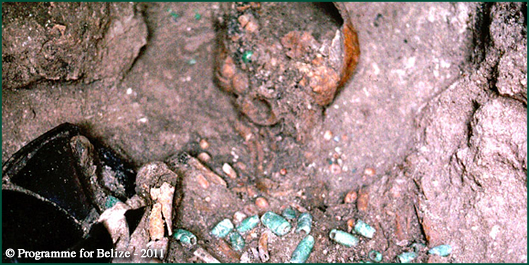 The Maya tended to build over existing structures and, like the layers of an onion, earlier buildings lie within those now visible.  As excavations continue and the fragmentary inscriptions on the badly eroded stelae are deciphered, a picture of the history of the site is beginning to emerge.  It seems that, like most important Maya cities, La Milpa was founded in the Late Pre-Classic period in c. 400 BC.  Some buildings, including the tallest temple-pyramid, date from this period.  It grew in importance and by the 5th Century AD, rulers such as Cimi K’Uk Mo (Death Quetzal Macaw) were proclaiming themselves as conquering warriors.  A period of decline then set in, with no new construction or erection of stelae, and one can imagine that La Milpa had become a satellite of some other center.  In the 8th century, rulers such as Ucay (whose stelae, bearing the date November 13th 780, is the best preserved on the site presided over a dramatic resurgence in the fortunes of La Milpa.  Most of the visible architecture dates from this Late Classic period, and the site expanded considerably in extent.  The renaissance was, however, short-lived.  In the early 9th Century, some fifty years after Ucay erected his stelae and following 1200 years of continuous occupation, La Milpa was abandoned.

The ancient civilization might have gone but the area was not uninhabited.  The foundations of a Yucatec long-house in the middle of the Plaza indicate that a man of a totally different Mayan culture dwelt amongst the ruins in 900 AD.  It also appears that many of the stelae were put in line in the Great Plaza after their true significance had been forgotten but whilst their sacred nature was still recognized.  Several are fragments, lacking their bases but carefully re-erected in line.  Offerings dating long after the abandonment of the site, and possibly as late as the 16th century, have been found carefully cached close to them.  Indeed the Maya were still a force in the area in the early 19th century when they mounted attacks on the first mahogany camps to penetrate the region.

La Milpa was rediscovered by a chiclero who took the famous Mayanist Sir Eric Thompson there in March 1938.  The site was then ignored (and indeed lost again for a while) until the 1970’s, when it was comprehensively looted.  The deep trenches in all the structures date from that time and the pickings are reputed to have been good.  Several trenches dug uncovered tombs of which at least two were coated with a red iron pigment that represented the Mayan equivalent of gold leaf.  The theft was suppressed in the 1980’s and the ruins left undisturbed.  It is now the subject of a long-term archeological survey being undertaken by Boston University. La Milpa is only one of the 60 Maya sites so far located on PFB land.  The University of Texas does archaeological surveys on all other sites.  Through such work we expect to learn much more of how the ancient Mayan civilization evolved, was organized and sustained, and why most of its centers eventually collapsed throughout the region.

The University of Texas at Austin’s Programme for Belize Archaeological Project (PFBAP) has been active since 1992 under the direction of Dr. Fred Valdez. During the summers of 1999 and 2000, investigations continued at several middle sized and small Maya sites, including Dos Hombres, Ma’ax Na, and Dos Barbaras. The focus of the research at the Dos Hombres site was to define the commoner (i.e. the majority of the population being more than 95%) activity as related to the ruling elites (about 5% of the population). Another aspect of the Dos Hombres research was testing and strategically excavating “non-elite” households to better define age-based and gender-based roles in the community. Findings at this site revealed a crypt type tomb containing the burial and various items deposited with the deceased. Among the find of the tomb were five complete ceramic vessels including a jaguar shaped bowl, a turkey effigy bowl and a slab-footed cylinder vessel with lid. The latter item is considered to be a Teotihuacan-style container indicating communication (direct or indirect) with the central Mexican civilization.

To date, 60 Maya sites have been located on the RBCMA. Among these sites is the ancient Maya city of La Milpa, i.e. the third largest ancient Maya city found in Belize. Two long-term archaeology research projects were established in 1992 on the RBCMA to investigate how the ancient Maya civilization evolved, was organized and sustained, and most of its centers eventually collapsed. La Milpa, a major ancient Maya city, located on the RBCMA only three miles from the La Milpa Field Station, has been investigated by Boston University projects since 1992 under the direction of Drs. Norman Hammond and Gair Tourtellot. The season of 2000 was devoted to testing a model of intentional city planning based on a cosmogram of the Maya world known from Classic hieroglyphics and sculpture, Maya maps of Conquest period date and modern Maya beliefs.

This model builds on the Maya fascination with aligning buildings and rituals to significant world directions. The findings suggest that the organization of the outlying special groups of plazas, discovered and studied during this season, are more of a cosmic design than merely a circuit of minor ritual pyramids.