The Rio Bravo Conservation and Management Area encompass seventy-five percent of the watersheds in Northern Belize, namely the New River, Rio Hondo, and Belize River watersheds. Very few studies have been conducted on freshwater issues in the RBCMA.  Consequently, the true situation of the freshwater systems is unknown. It is assumed that the stresses in the freshwater systems in the Rio Bravo are currently low; however, there are signs of increasing threats to the aquatic ecosystems. Contaminants of the systems include, but are not limited to: agricultural runoff, and domestic and industrial effluents. In light of this, Programme for Belize has initiated and established a Freshwater/Aquatic Programme and intends to develop a sound freshwater management plan for the New River Lagoon and the Rio Hondo to determine more long-term strategies for the conservation of Belize’s waterways. 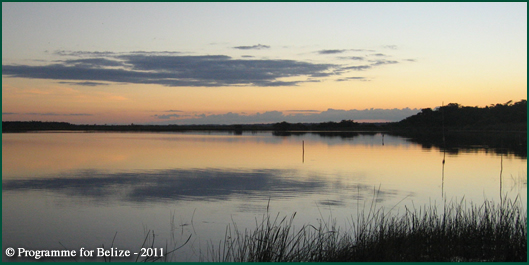 Programme for Belize’s Rio Bravo Conservation and Management Area (RBCMA)forms part of three out of the four watersheds in Northern Belize: New River, Rio Hondo and the Belize River Watersheds.  Historically, aquatic and riverine issues have been ignored in the management of the RBCMA and very few studies conducted on freshwater issues.  Consequently, the true situation of the freshwater systems is unknown.  It is assumed that the stresses in the freshwater systems in the RBCMA are currently low but there are signs of an increase in the threats to the aquatic systems.

There is evidence of pollution to an unknown degree and with unknown effects from at least three sources – agriculture runoff (including sediments and leached agro-chemical inputs), and domestic and industrial effluents. The Chetumal Bay, into which the New River empties, is already showing signs of sedimentation problems. The aquatic communities are also stressed by at least one invasive exotic species (Tilapia) and potentially by others.  Fishing, imposed on stocks of unknown size, structure, and health, and including a fishery for hicatee (a species of conservation concern) threatens the biodiversity of the aquatic systems in the RBCMA.  Recently, the New River/Lagoon System has been subject to an increased traffic of engine propelled boats as a result of the increasing tourism industry.  This poses a high threat to the fish communities especially the West Indian Manatee, which has been reported in the New River/Lagoon System.