The Rio Bravo Conservation and Management Area has two facilities at Hill Bank and La Milpa, serving as centers for field based conservation initiatives. It has propelled Programme for Belize towards remarkable success and put Belize at the forefront of scientific research and conservation.

The Hill Bank Field Station, situated on the banks of the New River Lagoon, facilitates research activities to ensure the protection and wise management of the forest. It hosts primary projects such as the Forest Rehabilitation Programme and the newly established Freshwater/Aquatic Programme. 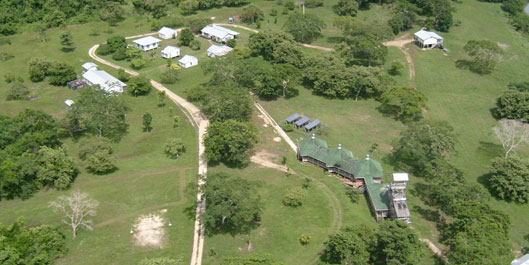 Located only three miles from the third largest archaeological site in Belize, the La Milpa Ecolodge and Research Center facilitates archaeological research though agreements with the University of Texas and Boston University. Through research carried on at and around the La Milpa Archaeological Site, Programme for Belize expects to learn more about how the ancient Maya civilization evolved, was organized and sustained, and why most of its centers eventually collapsed throughout the region.

Research within the borders of the Rio Bravo serves also to support a Contingency Planning Programme by clarifying the implications and potential impacts of economic development projects on the site. A planned road upgrade and test drilling for oil in the general area, for example, have the potential to increase pressure on Rio Bravo’s ecosystem. The degree to which they do so is highly dependent upon how they are implemented. In preparation for these potential scenarios, Programme for Belize must be in a position to help integrate developmental and environmental interests.

The land of the RBCMA has historically been used by chicleros, who harvested the gummy sap of the sapodilla tree, commonly known as Chicle, for sale to the international chewing gum producers. Initially, trees had approximately 15 years to rest before a chiclero returned to harvest it. As the demand for Chicle grew, chicleros returned more frequently to the trees and over-harvesting eventually diminished the population of sapodilla trees. It is widely believed that this lack of sustainability was a primary factor in the decline of the market and the substitution of Chicle by other gums, both natural and artificial.

In its land use plan, PFB had mapped out blocks of forest for Chicle harvesting. Some of these plots were dedicated to research to monitor the effects of harvesting on the sapodilla tree population and to determine an optimum rest period between harvests. On the production plots, PFB expected to achieve a sustainable yield of approximately 2.5 – 5 tons of Chicle per annum. The pilot project began in October 1993 and was completed in February 1994. The Chicle produced was analyzed and determined to be of a high quality. Market conditions however did not allow for the continuation of this project.

Preliminary investigations were done as to the possibility of growing orchids and house plants. In the case of the orchids, micro-propagation could produce thousands of flowers annually without endangering the orchids in the wild. Similar techniques were used to grow exotic house plants which have an immense international market. It was determined that these horticultural projects could have the multiple benefits of generating income without endangering forest species, providing employment in the villages surrounding the RBCMA where jobs tend to be seasonal and primarily domestic for women, and replenishing impoverished plant populations countrywide. Funding for this project was provided by the European Commission through World Land Trust. 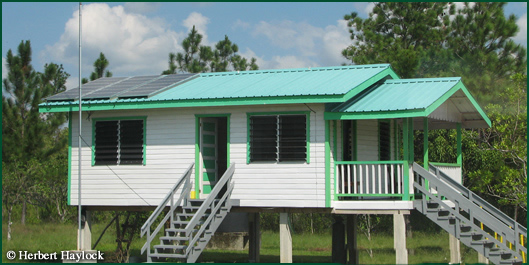 In partnership with Cornell University, a research project on Mangrove Swallows was initiated at the Hill Bank Field Station.  The objectives of the study are to establish a breeding population of Mangrove Swallows at Hill Bank, and to develop comparative data for understanding the evolution of life-history differences between tropical and temperate songbirds, specifically with the closely related Tree Swallows of Ithaca, New York.  Dr. David Winkler from Cornell University Laboratory of Ornithology is serving as principal researcher. 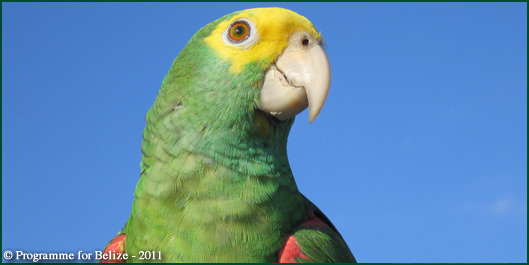 One species at high risk from poaching in the Rio Bravo is the Yellow-Headed Parrot. Endemic to Belize, these creatures are highly sought as pets because of their ability to imitate sounds and voices. Poachers prey on the chicks, going so far as cutting down trees in the pine savannahs where they nest to capture the chicks. Because they can only reproduce in the wild and bear only two to three chicks a year, their stock has been so severely depleted that they are facing a very high risk of extinction and have been placed under endangered status on the list of protected species.

In light of this, Programme for Belize has since implemented a Yellow-Headed Parrot Recovery Programme, which includes extra protection of nesting sites during the breeding months of March to July and a public awareness programme to reduce the demand for these parrots as pets.

Conservation education and awareness is no longer considered a separate management programme, but is dispersed as a component within all Programme for Belize’s conservation projects. Consequently, PFB has conducted workshops and education seminars in the villages surrounding its lands to educate residents on the importance of protecting the flora and fauna of the Rio Bravo. PFB will continue to use this important and interactive approach to gain further consensus and support for its goals.