“To Conserve the biodiversity and promote the sustainable development of Belize through the proper management of the Rio Bravo Conservation and Management Area and other lands entrusted to it.”

The business of PFB on the Rio Bravo is conservation of tropical forest. To date we have secured 260,000 acres of forested land in north-western Belize, designated as the Rio Bravo Conservation and Management Area (RBCMA) that was otherwise destined for clearance. Approximately half of this land is managed as a reserve for the protection of biodiversity and natural habitats. On the RBCMA, PFB conducts research, conservation education, professional training and promotes environmental awareness amongst visitors. National parks and reserves as islands in a sea of agriculture are not however adequate responses on their own to the issue of tropical forest conservation.

Programme for Belize has experimented with and continues to develop viable economic land uses that leave the forest and its environmental values intact. These projects are carried out in the buffer zone surrounding the protected core area, creating a reserve design based on Man and Biosphere Reserve principles. Activities in the past included non-timber harvest (especially of the chewing-gum base called Chicle), tourism and forestry. PFB also has an educational and community outreach component which promotes environmental education throughout Belizean schools and encourages ecologically-sound economic activity in the villages surrounding the RBCMA. PFB has established two facilities on the RBCMA, the La Milpa EcoLodge and Research Center which is a center for visitation, archaeology and environmental education, and the Hill Bank Field Station which is a center of research activities, protection activities, timber and visitation.

Research plays a crucial role on the Rio Bravo. There is a wealth of ancient Maya sites on the property and two long-term archaeological projects continue to unearth new information each year. A central question for both is to find causes for the civil collapse in this part of the Maya world.

Problems of the world today are also being addressed through ecological research to maintain the diversity of life and clarify the impacts of different human activities on the forest ecosystem so they may be minimized if not avoided. The long-term goal is to pay for the conservation of the entire area by wise use of its natural resources. We are dependent upon public support for our programs until our self-sustaining economic activities fully covered all operating costs. Tens of thousands of individuals in the USA, UK and elsewhere have contributed to the aquisition of the RBCMA lands through the ‘Adopt-an-Acre’ scheme.

There have also been major corporate, institutional and bilateral donors, notably Massachusetts Audubon Society, World Land Trust, The Nature Conservancy, US-AID, Mac Arthur Foundation and Perkins-Elmer Inc. Coca-Cola Foods Inc. has played an especially important role, through financial support and the donation of over 90,000 acres of high quality forest. We continue to achieve solid results and, with continued support from abroad and innovative action here in Belize, have every chance of realizing the ambitious goals laid down at the inception of the organization.

Whereas our immediate concerns must be with management, protection, and the development of economically and ecologically viable activities, the ultimate success of environmental projects globally will only be obtained by winning long-term commitment to non-destructive human-nature interaction. To ensure realization of this vision, Programme for Belize expends much energy and resources, directly and indirectly on community and education outreach in the villages surrounding the RBCMA and throughout the country.

Although there are no human settlements currently located on the lands comprising the RBCMA, Programme for Belize makes a particular effort to involve other Belizeans in our economic projects wherever possible. We concentrate on the villages surrounding the RBCMA. So far, PFB has assisted in the establishment of several cultural groups. Handicrafts made by these groups are sold to visitors of the RBCMA. PFB also extends assistance to these groups in honing their craftsmanship as well as their business skills by coordinating with other organizations or groups in the country for training. As tourism, horticulture, and forestry develop, job opportunities for each of these activities will simultaneously arise, providing much needed employment to the area.

The commitment of future generations to environmental ethics can best be secured through directed environmental education programs which teach our children to respect their human and natural environments. To this end, PfB has implemented various educational initiatives. We have worked with the Government of Belize in the past facilitating the incorporation of environmental science into the curricula for elementary schools and visiting schools to conduct ecology-related educational lectures. We continue to deliver these lectures today to various elementary schools in the greater RBCMA region and other presentations on environmental topics to secondary and tertiary level students from all areas of Belize. We also continue to host on site a number of local, secondary and tertiary level student classes throughout the year in furthering and expanding an appreciation of the sciences and ecology at the field level. There are more than 1,000 students visiting the RBCMA annually. PfB reaches international students by hosting ‘Save the Rainforest’ courses which include one week of terrestrial ecology and one week of marine ecology.

The merit of these efforts has encouraged us to expand our outreach programs to benefit more Belizeans economically and to touch the hearts and minds of more students nationally and internationally. Outreach remains a priority component of all our activities.

The topography of the area is characterized by flat rolling hills and a moderate strip of land with steeper slopes between 15 and 25 degrees. There are also thin ridges of land over 25 degrees with steep sided scarps that are part of the terrace-like topography of the region. A large percentage of the land is in upland forests. Further, a significant portion is comprised of marshes and mesic and swamp forests. Riverine systems are particulary distinct throughout the RBCMA and the New River Lagoon is a unique ecological feature. Finally, the two large tracts of Savannah habitat are significant, especially on a regional scale of ecosystem diversity.

The climate of the area is described as dry tropical and subtropical moist according to the Holdrige Life Zones. There is a clear seasonal precipitation gradient in the Rio Bravo area resulting in a dry season from February through April with evaporation rates higher than precipitation and a wet season from June through January. The total average annual rainfall is approximately 60 inches. The temperature is somewhat constant throughout the year with some seasonal fluctuation between cooler and warmer months with a range from 50 degrees F to 95 degrees F with an average of 79 degrees F. All of these data vary greatly from year to year.

The eastern portion of the area lies on the north Belizean coastal plain, being low-lying and underlain by limestone and soft marl blanketed over extensive areas by Pleistocene alluvial deposits. The principal topographical features consist of escarpments aligned SW-NE across the landscape that guide the drainage of the New River, Booth’s River, and Rio Bravo. The escarpments become more pronounced from east to west and above the most westerly the subdued relief of the coastal plain changes abruptly to the more broken, locally rugged, landscape of the Bravo Hills land system. 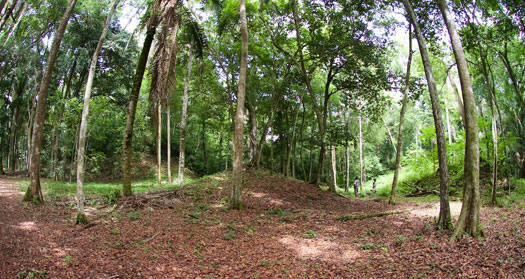 The Rio Bravo Conservation & Management Area is its flagship project where Programme for Belize demonstrates the practical application of its principles. 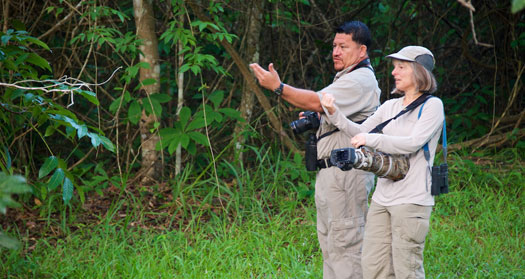 Click the button below for a listing of our Directors and Staff listings. 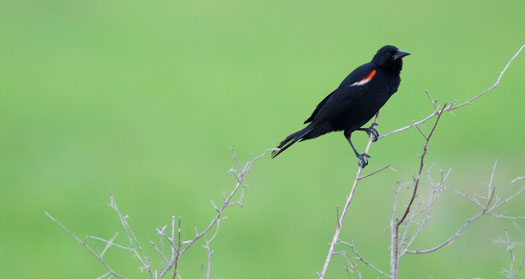